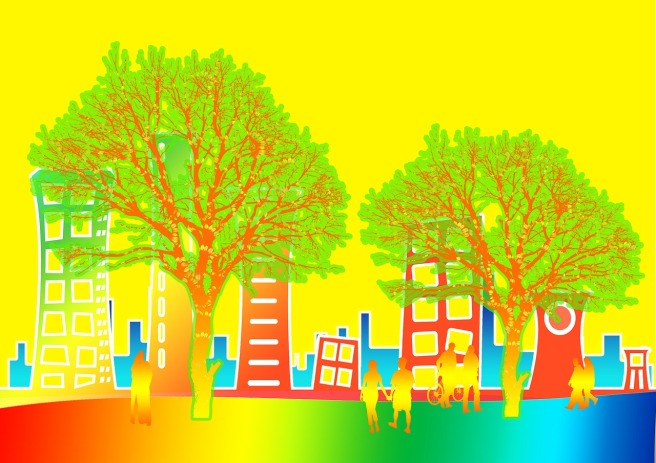 I am a city dweller.  Our city, Butler, might not look as urban as some cities.  That’s because like many cities of it’s size, it is the county seat of a rural county.  While this makes for some interesting demographics it doesn’t change the fact that Butler is a city.  Butler has an “average” city population density at 5,054 people per square mile. (check out city-data.com,  it’s pretty interesting.)  That’s a lot of people, regardless of how you classify it, urban or rural.

I’ve recently realized that our city’s physical location has many advantages.  It’s a small metropolis surrounded by open countryside.  Which means we have access to great farmer’s market and CSA’s.  There are parks and green spaces inside and just outside of the city.  Being a gardener, my little city plot is larger than most urban plots, which means I can grow my own fruits, vegetables, and flowers, while maintaining a manageable sized garden.  The Goat can ride his bike in any direction and be on beautiful country roads in minutes.

However, I’ve recently been hearing a lot of city bashing by those who live outside of the city limits.  These people say things like, “It’s so unsafe, there’s so much crime!”; “There are sexual predators everywhere”; and “The city has a drug problem.”.  I’ve got news for you, you’re not “safe” anywhere.  The city isn’t any less safe – it’s just more crowded.  The problem of crime isn’t necessarily based on geographical lines, but most often is rooted in human nature, and where there are more humans, there is more human nature.

I looked up some statistics, because I wanted to know what this fear was based on.  As of January of this year, there were 3 sex offenders living in Prospect, a neighboring “safe” community.  That makes the ratio of residents to sex offenders in Prospect 388:1.  Here in the city, that ratio is 262:1(city-data.com).  But let’s not forget, those numbers represent the people who are registered.  Those numbers don’t show the crime, just where prior offenders live now.  So let’s look at the crime statistics: in 2014 there were 91 reported sex related crimes in the county, only 16 of those were in the city, that’s less than 20% (http://ucr.psp.state.pa.us).  So where are the other 80% being committed?  Not in the city.

And those drug users everyone’s so worried about?  Yes, they exist.  Yes, we have a problem.  But chances are good that your area does too.  According to the state police statistics, in 2014 there were 81 drug violations with in the city.   County wide?  466.  That means that less than 20% of the drug related violations in the county happened with in the city limits.  I can live with that. (http://ucr.psp.state.pa.us)

Property crimes?  Sure there’s vandalism and crime in the city,  what city doesn’t have graffiti, litter, and broken windows?  And yes, property offenses was the largest group of crimes in the city in 2014 with 733 reported – just over 2 a day.  But Cranberry Twp., one of the more up and coming areas in the county, reported 493 during the same time period – 1.35 per day.  As a matter of fact, there was only 1 county jurisdiction that had 0 reported property crimes during 2014 (http://ucr.psp.state.pa.us ).  Which means that no matter where you live in the county, you’re stuff stands a chance of being vandalized.

I’m not trying to trivialize or glamorize the situation.  I also know that both sides can quote stats and make their arguments plausible.  I live in the city; I walk around the city; I go to church in the city; I eat at restaurants in the city.  I live here because I can access resources easily – we have a state of the art hospital with in walking distance, a great library, a symphony and a baseball stadium.  The neighborhood kids play on the sidewalk and run from yard to yard.  Many of them also walk to school, or the bus stop.  I am a huge fan of city revitalization and believe that we need walk-able, green, and human centered cities.

However, I’m not so naive as to believe that I live in Lake Wobegon or Mayberry.  I know cities have their problems, and that each city is different.  But let’s be realistic.  The thing is, as humans we tend to fear, demonize, and sometimes even idealize, what we don’t know or understand, things as trivial as habitation to things as weighty as religion.  How many books or movies have been written about the city slicker in the country or the country belle visiting the big city?  How many small town/country kids dream of leaving it all behind and running away to the glamorous big city?  And how many city dwellers dream of a quiet place in the country?

Society needs both the city and the country.  Historically, cities have provided mass commerce, education, shipping, and production while the country and farmland has provided food and raw goods.  Society can’t exist with out either.  Many of today’s cities are located where they are for a reason – a train stopped there, it was a shipping port, it was a day’s ride from the last source of supplies.  Cities create jobs, jobs need people, people need food and goods, goods need transported, it’s a cycle.  Think of it as a Yin and Yang style relationship.

It’s OK to not like the city or the country based on your personal experiences, it’s not OK to make assumptions based on the unknown, those are called stereotypes.  So let’s be civil about it.  Living in society requires each of us to delve deep into ourselves and realize the spark of life in all humans, regardless of their choice of habitation.  Who cares if you live in a high-rise, on a farm, or somewhere in between?  We all live on the planet Earth.  Let’s keep things neighborly.

Trying to leave the world a better place, one day at a time. I own a yarn shop, garden, bike commute when possible, own a crazy dog, live in an urban setting, and am a unicyclist. These are the outwardly visible things that shape my daily life. View all posts by Lisa Trefsger

"Mermaidens" an anthology of nineteen stories about women with tails, will be available in October. Preorders are now open. Click either link to purchase your copy.